Celebrate 4/20/2020 and join the fight for Cannabis Amnesty

Happy 420, fellow canna-lovers. Cannabis connoisseurs have long held April 20th (4/20) as a day of celebration, a time to gather and embrace the herb, regardless of its state of legality.

As the myth behind 420 goes, (according to Wikipedia), in the early 70s five high school students in San Rafael, California were in search of an abandoned cannabis crop.  They called themselves the Waldos, because they hung out at “a wall outside the school.”  The group would gather daily at 4:20pm to coordinate their hunt.  When their efforts to find the crop were fruitless, the students continued to meet at the same place and time to partake in the habit that inspired their search.  The tradition gained traction in the community, according to Steven Hager of High Times thanks to fans of the Grateful Dead.  One of the original Waldos, David Reddix, became a roadie for the Dead’s bassist, Phil Lesh , and he called for 4:20 PM to be the socially accepted time of day for cannabis consumption.  And the rest, as they say, is history.This year was meant to be the most righteous of 4/20s, in that there will literally be four twenties:  4/20/2020 at 4:20pm will be the ultimate moment in cannabis celebrations.  But like the many nice things we can no longer have, the COVID-19 crisis has thwarted all hope of the epic in person parties cannabis lovers have been dreaming of leading up to this year.  Today also marks the second 4/20 under the Canadian Cannabis Act, which legalized cannabis for recreational use on October 17th, 2018.  And while legal medical and recreational access in our country should be celebrated, it bears repeating that cannabis legalization has not benefited every Canadian, and in fact has left many people behind.

As more and more places around the world move away from the criminalization and towards the legalization of cannabis, a new and lucrative industry has risen to benefit the privileged, while fundamental injustice continues to be inflicted on the oppressed and marginalized.  There are millions of individuals who have suffered convictions for crimes that no longer exist in places where cannabis is legal, and biased enforcement where it is not.  While some profit from legalization, others continue to bear the stigma of those convictions, including limited access to employment and the chance at financial success, the stigma related to criminality, and the mental health and wellness issues that come from those struggles.

In North America there are two organizations fighting for criminal justice reform when it comes to Cannabis.  In Canada, Cannabis Amnesty is a non-profit organization lead by legal experts and community organizers campaigning for blanket pardons for anyone convicted of simple cannabis related offenses.  While the government has shown some leniency on the subject with the passing of Bill C-93 (providing no fee, expedited pardons), Cannabis Amnesty is still fighting to remove all remaining barriers, cost related or otherwise, from gaining those pardons, and for full criminal record expungement to ensure true cannabis criminal justice reform is achieved.

The COVID-19 crisis further shed light on why cannabis amnesty was more necessary than ever: overcrowded prisons are a potential hotbeds for outbreaks.  Individuals incarcerated for minor cannabis related offenses are put in harms way, when, frankly they shouldn’t even be behind bars in the first place.  And Cannabis Amnesty agrees.  According to the press release they put out today, “the Campaign for Cannabis Amnesty is adding its voice to the growing number of rights groups calling for the immediate release of as many inmates in custody as possible to prevent the spread of COVID-19. Among other options, measures should be taken to allow for the early release of those convicted of cannabis and non-violent drug offences. Decarceration is the only way to protect prisoners and staff of correctional institutions from COVID-19.”

While cannabis is not yet legal on a federal level in the US, the legal cannabis industry is a multi-billion dollar one, and millions remain behind bars for cannabis related offenses. The Last Prisoner Project not for profit organization fighting for criminal justice reform when it comes to cannabis.  It’s a coalition of cannabis industry leaders, executives and artists dedicated to bringing reform, and hopefully equality, to this very flawed and broken system. Through intervention, advocacy and awareness campaigns, the forces behind the Last Prisoner Project work to fight the continuing harms of laws and policies that disproportionately affect minorities and the poor.  Like Cannabis Amnesty, the Last Prisoner Project has been fighting tirelessly for the release of incarcerated individuals in the wake of COVID-19, specifically those convicted of minor cannabis related offenses.

Many of today’s U.S. based virtual 420 celebrations will be working to raise funds and awareness for the Last Prisoner project, so cannabis consumers can do their part to help the cause while celebrating in the comfort of their own homes.

So while we take today’s 4/20 to celebrate cannabis culture and the new levels of acceptance it continues to find, we must also work to ensure that everyone can benefit from its legalization, not just the rich, powerful and privileged.  Check out some of the virtual 420 events taking place today in the U.S. and Canada, that are also helping to fight for equality in the cannabis space.

Who's your #CannabisHero? We want to know!

This 4/20, post a picture of and tag a cannabis hero in your life, and tell us what makes them so great!

We'll also be posting about our own heroes, so keep an eye out! #CannabisAmnesty #RightingHistorysWrongs 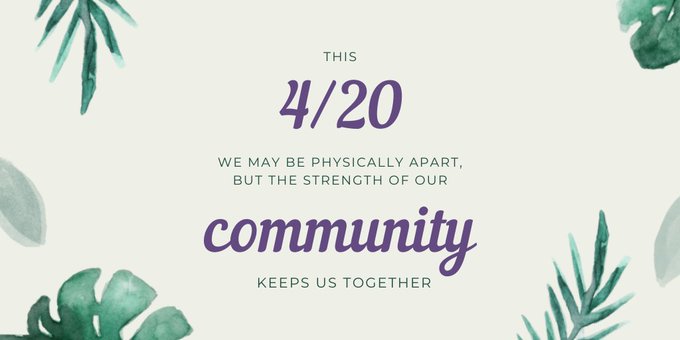 This 420, Cannabis Amnesty is asking people to embrace the spirit of community and nominate their cannabis heroes.  All you have to do is use the #cannabishero and #cannabisamnesty hashtags when you share and tell your story.  Watch Cannabis Amnesty’s twitter feed for their own nominations of activists and allies in the Cannabis community.

WATCH THE TOWN HALL   The Cannabis Amnesty Town Hall on Racial Justice was our flagship event designed to provide...